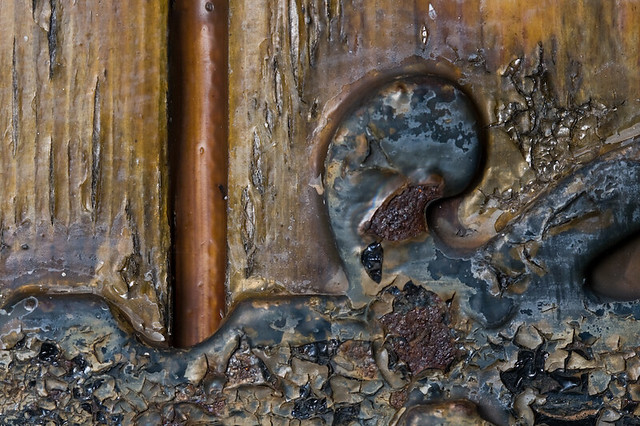 There’s a place for mooring on the sunset end of my block where forgiveness can be swapped for a perfect circle. Forgiveness is a schedule I, so narcs gather on block’s periphery where the postindustrial pipe overhang hides them in shadow to make their busts.

Sometimes I dive into the waterlogged places where the concrete’s gotten through and dip and bob as the deals go down, with artificial waves lapping at pavement’s edge and erosion doing its job. There’s room for a gullfamily on one of the rock rafts, and they watch with me.

One lady offers everything she has to a circle scalper, but they’re going for five hundo each sans inflation and she got a family to think on and he should be ashamed of hisself for runnin that shit on this block. I kick away my shoes underwater. An unseen fish eats one and saves the other for his fishfamily.

Another guy dismantles his house and offers copper wiring, flaky mortar, withered brick. He says he’ll stack it into a palatial thing for the dealer, but dealer’s not buying. His son camps out in a tent nearby with his muddied feet and seaweed hair and starts every sentence with once upon a time like his daddy taught him to do.

I saw a human being take himself to pieces and give of them for a circle for forgiveness. He diced his ankles into bite-sized cubes and garnished them with powdered kneecap. Kept saying take my patella. His body stopped homeostating around neck level and the dealer turned down the talking head.

Now there’s a line stretching onto building-flanked fire escapes, crumbling mud rooftops, neighbors that are waiting their turn in water up to their necks beside me, baptizing tattered clothes and feeding the gulls the offerings they hope will put them on the dealer’s better side.

And here are the dogs sent in in couplets and quatrains, jaws snapping on denouement and not the type to pet on doggy beaches but here now, narclight sidling in as bodies scatter past and I’m here floating, amniotic as the flotsam gathers in wisps and draws and the dealer closes up shop till next time.