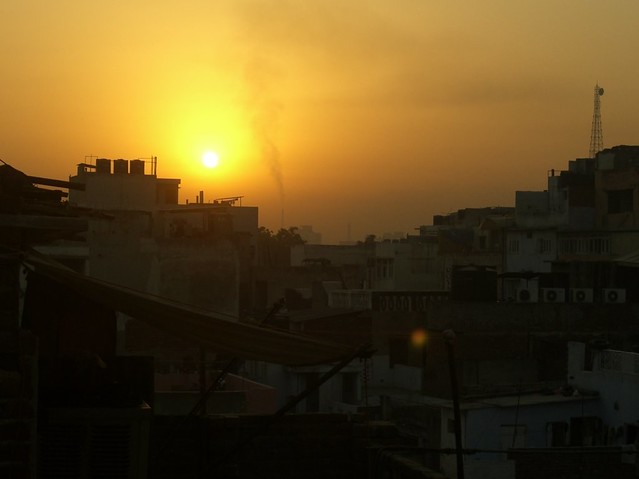 Madhan called last night and told me he needed to see me, called late at night so that I had to pull the phone’s cord as far as it would go away from Mama and Baba’s room, so they wouldn’t hear us talk. They thought I’d stopped talking to him after they told me to, but they were wrong.

I haven’t gotten any sleep since I hung up the phone. I got back home from night school, slipped in quiet so Mama and Baba wouldn’t hear, hid my books, and Madhan called right after, as if he knew. Maybe he did. I don’t know. That boy seems to know so much.

The night moves into morning, and I spend it by sitting on the grass, in a field near my home, watching the way the purple of the sky turns to pink, the stars disappearing into nothing. This place I’ve been to with Madhan so many times before, lying on the grass and looking up at the sky, far enough from New Delhi’s center that it’s quiet, close enough that the city’s lights erase some of the starlight.

Madhan said he’d be here by sunrise, like the times before, when we’d shield our eyes from the light and watch the city come to life, the stray dogs rising up from the ground like steam to wind their way through the city and find another meal. But Madhan isn’t here. I told myself I wouldn’t cry, but my eyes are clouding, letting the light take over everything. I’m standing up, the dew on the grass clinging to my feet, and I’m putting my sandals back on, trying to figure out which way to go.

I get to the bus stop, this bus that will take me to Madhan, that will get me the answers that he suddenly doesn’t want to give. I sit on the bench and wait, but after a minute I’m back up, pacing, waiting for the bus as the sun rises into my eyes and blinds me. Finally, I’m not even pacing, just standing, and this old dog comes up to me with his tail between his legs, big eyes looking at me, begging for food.

I put my hands out to show him I have nothing, but he persists. He sniffs both hands to make sure that I’m not hiding something, then walks behind me and sits next to the bench. I take it as a sign and take a seat, reach out and pet his head, scratch his nose, his gray whiskers moving as he smiles at me. I can see the dog’s ribcage, and he limps on one of his hind legs, but this old dog doesn’t seem to mind. He just sits there next to me with his tail wagging, brushing the dirt from the ground like a child who doesn’t know how to use a broom. I pet him so we can both forget for a while.

When the bus is in sight, I want to leave this stop and this old dog and go back to the field, back home. Somewhere else. But I don’t. I get on the bus, and I pay my fare, and I take a seat, and I wait for the stop that will take me to Madhan.

The beggar children try to stop me everywhere I go once I get off the bus. They cup their hands into little ponds that are waiting to be filled. When they reach out their hands, I hold them briefly and apologize. I have nothing to give.

I get to Madhan’s door and knock. It takes a few minutes, but finally he comes to the door and asks who’s there. When I tell him it’s me, he waits a while before opening up, peeks through the crack between the door and the frame to make sure it’s actually me. Opens it up the rest of the way and says nothing, only looks at me.

He puts on some tea and offers me a seat. We don’t talk until the tea is done, and he pours my tea with shaking hands. He starts by saying, “You know how I feel about you.” When he says this, my stomach drops. He sips his tea so he won’t have to say anything more, and I do the same. Finally, he says, “I have to do it.”

It’s his parents, he says. They’ll never forgive him, never let this go. They hadn’t approved of me, and they never would. Anyway, it’d be better for me. This way, we wouldn’t strain things with our parents. He could marry who they wanted him to marry, and I could marry Suddho. And when I tell him I don’t want to marry Suddho, I want to marry him, how Madhan takes my hands in his and kisses them both, first the left, then the right, then the left again. How he tells me we can still see each other, how he can visit me in America if Suddho is still to take me there. And when I ask him why we can’t run away together like we’d planned, how he looks away so I can’t see the tears clinging to his eyes. How he kisses me, deeply, and holds me to him.

We spend what feels like hours there, ignoring our tea, holding each other, barely separating, wanting this moment to never end. And when we finally separate, how he tells me he’ll call, he’ll see me. How I cry because I know this isn’t true. We both know it isn’t.