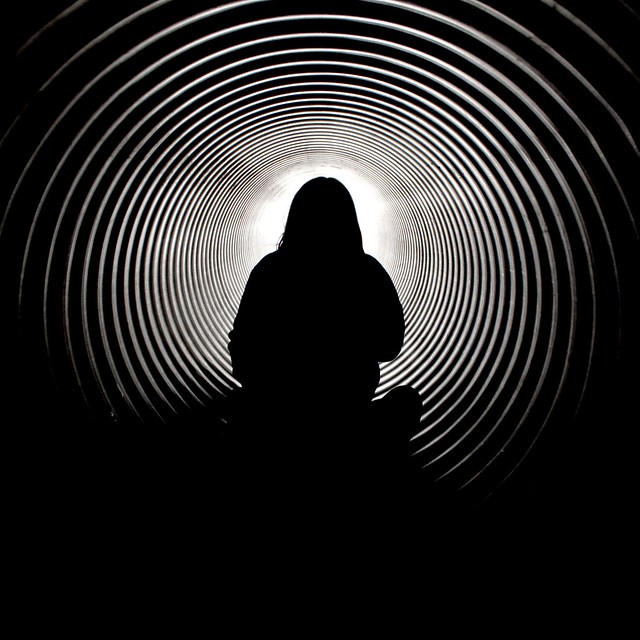 We wake and stretch and find ourselves together. Lula takes my pages and reads them before I can tell her not to, by buglight, and when she’s done she doesn’t say anything. She puts them away, stands, walks to the far wall, and says Jesus, even though I’m pretty sure she doesn’t believe. I’m pretending I’m more in a stupor than I actually am. She comes over. I get up and hand her a buglamp, grab one for myself too. She takes it and walks down the hallway, past the endless procession of identical concrete cube rooms, lightning bugs blinking spots on the wall to light the way. I reach her and touch her arm. I say:

“This is kind of like how it was underneath the Center. Maybe a little spookier, but pretty much the same.”

“We had matches, though. All we could sneak in. The light would go out and you’d get your fingers burned if you weren’t careful. I always was, but some of the other girls weren’t.

“They’d sneak cigarettes because that’s the only way I’d let them come with me. I knew my way around underneath the Center and they didn’t. We called it the labyrinth. I called it that, anyway. I don’t know what they called it.

“Anyway, after a while I figured I’d smoke the cigs instead of using the matches since the matches always went out. Cigarettes lasted longer.

“They weren’t all cutters. I mean, I was, but some of them were like bulimic or anorexic or something like that. We had this doctor. Dr. Charon, and he’d lead us in what he liked to call Allegorical. He’d tell us to speak our Hurt in one word. He told us it was capital H Hurt. He had a bunch of weird games like that. I don’t think any of it helped. I remember one day he asked for my one word and I just left and went under the Center, into the labyrinth, and I smoked my cig, and pulled out the bobby pin I took from one of the RNs and sharpened it on the concrete and started stabbing it into my ankle. I had thick socks that hid the blood, is why I chose the ankle. In case you’re wondering.

“Anyway, I made like little constellations with the pin, in my ankle. No one knew about it. I’d come up and Charon wouldn’t ask. Just welcomed me back into the group.

“The other girls always talked about boy problems, friends who were dicks to them, that kind of shit. I was there ‘cause my mom had cancer and so I cut myself. There were other reasons, but that was mostly it.

“Anyway, when I’d feel really shitty there was this one girl. Liza. We were roommates. She was there because when she was four and five and six her dad molested her. Had her wear dresses and sit on his lap when her mom wasn’t home and would have to adjust her clothes for her, under her dress. She told me all of this. Well it went on for a few years and then just stopped. For a little while after that she could be a normal kid. Or about as normal as you can be after something like that. Her dad drank for a while, then didn’t, then drank again. Her mom wouldn’t leave him alone with her. She never said anything about it, but she didn’t have to. Liza’s words, mind you. So anyway, it was okay for a few years. Until Liza started developing. Keep in mind, when I knew her she was gorgeous. Liza would never admit it, of course. She’d say she just looked normal. I knew her when I was fourteen and she was fifteen. She started developing around twelve or so. Becoming a woman and all that. Meanwhile her mom and dad’s marriage was pretty much nonexistent. Her dad would ‘work late’ till like ten p.m. At first he’d call and say he’d be late. Then the calls dropped off. Then he didn’t even bother giving excuses. So her mom started ‘working late’ too.

“Anyway, eventually Liza’s mom was out more than her dad was, and she was developing, and he started hanging around the house, after work, reeking of booze. Started conveniently doing the laundry across the hall when Liza was in the shower. Their bathroom door had one of those old timey keyholes you could peek through if you wanted to. When Liza realized this, it’d already been like weeks of this going on, but then she started hanging her towel over the knob to cover up the hole.

“So then her dad said she couldn’t lock the door anymore. Said it was a fire hazard, or that she could pass out, and what would he do then, just let his own daughter die? She left it unlocked.

“She was thirteen the first time her father raped her. Thirteen and in the shower and singing some song by Christina Aguilera and he pushed her against the wall. Stopped her singing. Left the shower running. Got his clothes all wet. And she grabbed at the curtain and pulled half of it down but he wouldn’t stop.

“This went on for a year. Like clockwork. When Liza locked the door, he busted the door open. Fixed the lock before her mom got home. When she stopped showering he went into her room at night and did it while she was sleeping. Woke her up. When she locked her bedroom door he jimmied it open with a screwdriver.

“It got so death was preferable to life. She fantasized about killing herself. Tried a few times. Or at least said she tried. I think that fighter part of her refused to let her do it. No matter how bad it got. Finally, it was either she’d die or she’d tell someone. She was resourceful. She found a hotline. Told them everything. Gave the cops the whole story when they came. Detailed everything. Her dad was arrested. Tried. Convicted. And so she went to the Center and her dad went away.

“When I met her she was doing pretty well. Really well, actually, considering the kind of shit she went through. You couldn’t meet a more positive chick. The whole time her father had been raping her she’d gotten super skinny. Scary skinny. But when she came to the Center she ate healthy, drank a lot of water, went on walks around the grounds and told her Hurt in one word, spoke at every Allegorical. She was like the model resident, but none of us were jealous or anything. She was the kind of person you wanted to see succeed no matter what. No matter who you were. Everyone loved her.

“But she went out on a belt anyway.

“I found her first. Her toes were purple and she was swaying, back and forth. Like she was on a swing or something. She wasn’t on restriction, which is why they let her have a belt. In case you’re wondering. ‘Cause I was wondering. I was wondering how come they didn’t take away her belt and her laces and her sheets and tie her hands behind her back if this is what she was capable of. If this is what she’d do to herself. I hit Charon in the face and I punched a window out and I clawed the wallpaper and knocked over everything I could knock over and I cried till I couldn’t cry anymore and could only sleep, right where I was crying, on the floor. I’ve never cried like that in my life. I don’t cry.

“I didn’t know why she did it. Still don’t. But nothing will change what happened. Nothing will bring her back. And I was hurt for a long time after that. I couldn’t deal. And I hated Liza, wished I’d never met her, all that.

“But then I stopped hating her. I stopped trying to blot out the memories we had and I saw her how she was, before she went out on a belt. In her stories and her smile and the way her eyes lit up when the sun came in just right and it looked like they went from green to blue, just like that.