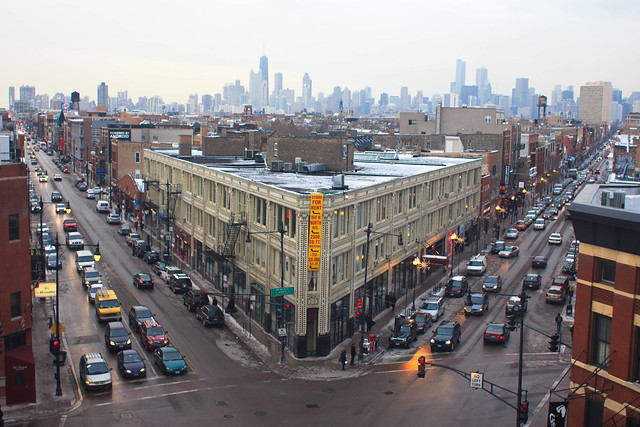 Coming out of the suburbs and into the city felt, for him, like grabbing his passport and crossing the border. He came from a shitty suburb, sure, but the culture was night and day. So he’d take walks around the block when film classes would let out, listen in on cell phone conversations and jot down good dialogue for possible future use.

Crossing the streets became knuckles turning white, crushed between your mother’s hands as a small child, always told to look both ways. But then as now, he was making his messes, assuming that he could always clean them up later. Weeks of film school in this “foreign land” became episodes of a show he didn’t have the show bible for, no clear course to chart, no lines in the sand.

Other students in his classes obsessed over technique and form, but that all seemed like staring at the glass instead of looking through the window to him. There were more productive things that you could do. So he rented out a Bolex from the film cage, kept it out days after he was supposed to return it, and captured footage from all over the city. Met up with an artist colony in Wicker Park that had bought an entire building, were forming it into their own artistic micronation utopia.

Met an artist there: Vieve. A couple years older than him, she was a Columbia College dropout who worked in multimedia, emphasis on the “multi.” She was working on a project that started out as an autobiography but turned into visual/written alternate realities when reality could no longer keep up with the fiction. In one timeline, a claymation film, she was already married and had kids, the homemaker her parents always wanted her to be. Existing alongside this Vieve was one scripted in a series of short screenplays: the one who graduated, went off to grad school, and accepted a position as an art professor at a prestigious school. A series of miniature paintings you needed a magnifying glass to get the full detail of, paintings that told the story of a globetrotting vagabond who sold art for just enough to buy a plane ticket, then lived off of the generosity of others once she got wherever she was going.

All of that was just what he could see, in between classes and on his days off, when she was in her studio and would let him in while she worked. More than half of her work was under blankets, and no amount of coaxing on his part would make her budge.

The final project for his foundation film class was to shoot a short documentary, subject matter up to him. Naturally, he picked Vieve and her art. She was apprehensive at first, for two reasons. 1. She didn’t like being the focal point of anything. 2. He was shooting this for Columbia College, and there was still bad blood between her and that school. But she caved when she saw how interested he was, how he wasn’t going to be exploitative.

In the second week of pre-production, they kissed. It wasn’t planned at all. It was just one of those things. He’d been standing behind her while she demonstrated a mini Vieve robot she’d constructed from a bunch of junk, when she turned around to say something. Their faces in kissing distance, they both smiled, and she turned away again. She turned the robot on, let it skitter around the enclosure she’d made for it, and turned around again even though she didn’t have to. And that’s how they kissed. When the moment was over, they both turned back to the Vieve-bot and watched her scramble around, not quite knowing which way to go.

The thing about Vieve was that she didn’t want to name any of her pieces. So he’d go around naming them out loud, asking her what she thought of this one, or that one, and she’d just nod and say sure, turn to work on something else while he worried about naming everything. All of his projects started with a title, he’d tell her, something so he could understand where it was headed as he went along. That it gave shape to everything else. But she wouldn’t acquiesce. Everything remained untitled.

After a while, he just couldn’t find her. He’d knock on her locked studio, but she wouldn’t answer. The door’s window was covered up by a blanket, but it had already been like that before. Vieve liked her privacy. He came again and again, day after day, looking for her. He already had enough footage for his documentary, but that didn’t matter.

Weeks passed. He submitted the completed doc, got an A on it. It was hard watching Vieve as he edited, noticing every detail of her smile, the way her eyes wrinkled at the corners, proving that it was genuine. It was hard to hear the smokiness of her voice, how it could go from a whisper to warm excitement when she was explaining one of her pieces. More than any of it, he just felt like a rat in a maze.

He waited a couple more weeks before returning. But for some reason, he couldn’t go inside. So he stood out on the corner, looking at the building, his jacket collecting snowflakes. The snow haloed the light around him, and what was on the ground shushed cars as they drove quietly past. Who knows how long he was out there, silently waiting.

He could’ve sworn he saw her out there in the night, walking off down a long road, scarf coiled tightly around her face, but he couldn’t be sure.

He just couldn’t be sure.