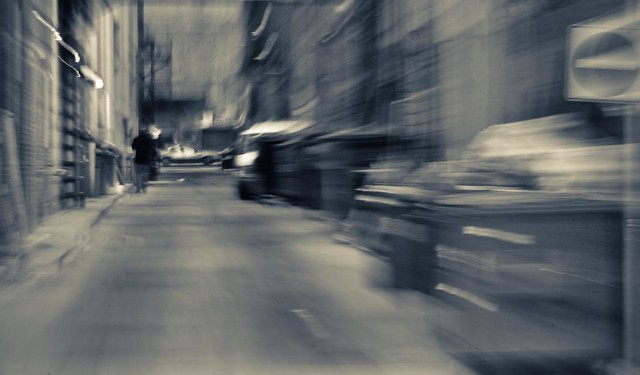 She came out of sewer grates, alleyways, locker- and bathrooms. Anywhere she could get equal footing. Had a stink about her. About was the best word because it was more descriptive than odorous: talcum powder sprinkled on week-old vomit. Feversweat collected under fat folds. Rank was kind. Rank was polite.

Followed behind, step for step. Would vanish when he’d turn around; fly into air ducts or toilet bowls or sticky corners. Stink would stay, though.

But she was A. listening B. watching C. smelling while he was 1. talking 2. walking 3. fucking. Hasty scribbles on pages where the answers go. Guess all of the above.

She’d put proofs in his head: “If God is omnipresent, then He/She/It is in the asshole of every diarrhea-addled creature.”

He wandered widely and sought answers in all the traditional places. Shared chifrijo at a greasy spoon down Avery with a Californian Zen master on Sundays. Said master heard what he said but didn’t seem to see her. The lady from the sewers. Suzuki and Watts on pages and tongues. Zen in the Art of Insert Here. Kids these days. I’ll get the check.

Would walk the cemetery alone most nights, looking for names he knew. She’d cling to his shadow and modulate to something like centuries of rot. Another proof: “If God is both omnibenevolent and omnipotent, then H/S/I isn’t good with definitions.”

He’d walk into Catholic Mass like the old C & E days sometimes. Strictly for an aesthetic reason, he assured you. Came out as anesthetic on the days when Father over-commited with the blood of Christ and didn’t want to drink alone. They’d fill paper cups to the brim and chat through the latticework. “You wouldn’t believe the things people tell me.” (After a couple cupfuls.) “Judas wasn’t as bad as we’d have you think. Someone had to do it.” (After half a bottle.)

She’d take the screen opposite Father and sit still, stare ahead. He couldn’t see her eyes, but he knew they were watching him.

Stood on ledges of old haunts and called appropriate ex-friends. Invited them to reunion hangouts while they tried to talk him down. Got a few free lunches this way. Nothing too snazzy, but hey. When he ran out of ex-friends he moved on to ex-girlfriends. A few suggested he jump. One just hung up.

He collected surfaces with which to reflect her. Phone screens. Parked cars’ mirrors. Those little plastic bubbles that quarter machine toys come in. Could’ve sworn he saw her this one time, but it turned out to be a half-naked homeless woman at the bus stop, trying to read texts over his shoulder. He was so relieved he let her finish reading. Used her suggested response, too.

Anyway, the bus stop lady said maybe he wasn’t suicidal. Maybe he was just sleepy and needed a nice nap. I could use a nice nap, she said. And he liked that, so he wrote it down and saved it for later.