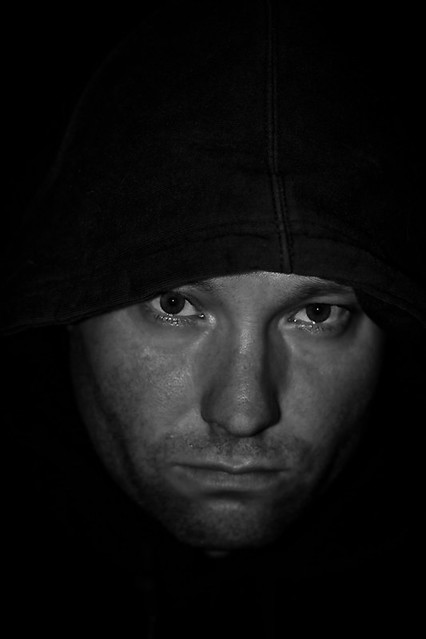 When I was little, like five or six, I watched my dad fight for money for the first time. It was our little secret. He’d come up to me, bloody-lipped, and remind me what it was I had to say. I’d go, “Secrets secrets are no fun. Secrets secrets hurt someone” and he’d slap me upside the head before buckling me up in the car.

He’d clean himself up real nice while Mom worked the third shift, apply ice to his lip and wash away all the blood. He went through bleach like nobody’s business cleaning up all his tanks. The jeans would go through the wash three, four times before even some of the blood would come off. It became so I was his little partner in crime. His thinking, I’m pretty sure, is that if they see he has a kid, maybe they’ll (subconsciously or otherwise) lose the fight. Most fights it was $25 if you lost, $50 if you won. If Dad was on a losing streak he’d tell me he was “counting his quarters.” Guys bet on the side, raking in cash or giving it away.

I scooped up my father’s teeth when I was seven, big root structures like the undersides of trees poking out of them. He’d later say he was glad they were back teeth. Easier to hide from my mom. The guy who knocked them out threatened to do worse, and the organizers held him back as he bellowed. My father had been taunting him. My father liked to taunt people, whether that was a good idea or not. His thinking, I’m pretty sure, is that if he taunted them, they’d get pissed and sloppy, and he’d be able to get some good shots on them. It rarely worked, but he did it anyway.

I was eight when my mom found out. Call it an anonymous tip. We still don’t know which of our neighbors squealed, but they must’ve seen him coming in all bloodied up one too many times. She didn’t know it was from fighting until I told her. My father chased me around the room when I said this, threatened me with everything in the book. Told me to come and take my punishment like a man when I ducked around the kitchen table. Mom told him off and he stopped coming after me. I’ve never seen so much malice in a man’s eyes as I did then.

What the fuck was my father thinking? Didn’t he have any concern for anyone other than himself? And what did he think he was doing bringing his kid around with him to this? Didn’t he have any sense in that thick skull of his? He was to quit doing it immediately. But honey, he already had a couple fights lined up. No way out of them. And she didn’t give a shit if he had a shot at the heavyweight fucking title. He was done. Did he understand that? And yeah. Yeah, he understood fine.

He went out the next week. Call it a compulsion. Call it an addiction. Call it willful stupidity. We were out of the house the next day, divorce proceedings to follow. I don’t know for sure because I never did see him again, but word on the street is he kept on fighting, this time to pay for child support. We moved somewhere quiet and shaded with big, leafy trees. Last I saw of my father was a bloody old tank that slipped through the cracks and into our laundry, one of the blood stains shaped into a heart.