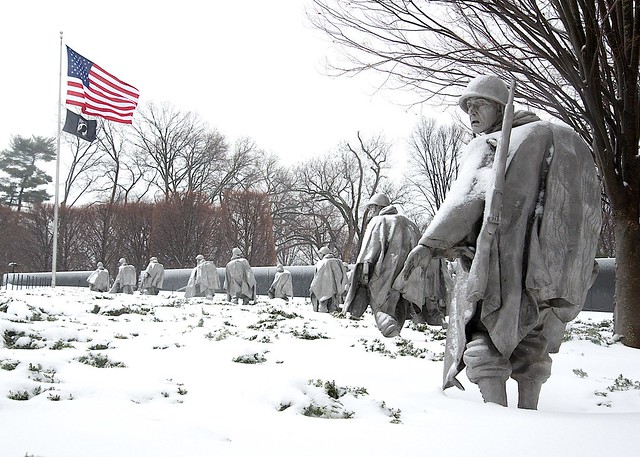 Today is December 1, 1950. My birthday. I am now twenty-four years old. There’s been difficulty getting mail in what with the cold. Thirty below some nights, or so they say. Haven’t heard from Genevieve in weeks. No more, “Dearest Phil,” “My Love Phil,” “Sweetest Phil.” Nothing but the blinding cold here in this godforsaken place, this Chosin Reservoir. They call us The Chosin Few. Ha.

Most days are spent rotating between who stands in front of the tailpipe, our vehicles kept running most of the time just to keep them from breaking down. One day they gave us hot cereal over at regimental headquarters. The hot milk was frozen solid within thirty feet of walking away from HQ. I mostly just eat Tootsie Rolls now. They’re the only thing that’ll melt in your mouth, that won’t freeze solid.

The Chinese have been attacking for days now. Nights, rather. They wait till we’re sleeping, play recordings of babies crying, women screaming. Lie in wait till one of our men goes to investigate, gives up our position. They gun the poor bastard down, come for us. I’ve heard that the chinks get hopped up on morphine before they attack. Lets them take shot after shot before going down. Fucking animals. I got in a few firefights, tracers the only thing illuminating all that dark. No way of knowing if I got any confirmed kills, but I like to think I did. Hardest part about it was keeping your hands steady in the cold, heat sapped from your fingers in seconds.

I lie awake at night, my breath disappearing into the wind, icicles clotting my beard, my nose. In my breast pocket, frozen solid, is the letter where Genevieve first admitted she loved me. Whether it was out of fear she’d never see me again or something else, I’m not sure. But I know I need to see her again. Fucking terrified I won’t. They say the Chinese like to come in three waves. First one carries rifles. Second follows up with grenades. And the third. The third just scavenges from the dead. These chinks fight like it’s their homeland. You’d never know the difference.

I want to have children. Grandchildren. I don’t want to die alone in this frozen hell, eyes glazed over with ice. I want to see my mom. Even my drunk of a dad. All that petty bullshit between he and I doesn’t seem so important anymore. If I could just touch Genevieve’s hand. Last I heard from her, she’d been having more spells. No sleep for days. Screaming at her parents. No one knows what it is. They have her on pills, but they don’t seem to be working. If I could just be there with her, she’d be okay.

I don’t know how many more times I can survive these attacks. Seems I haven’t slept in days, each day melting into the next. Melting. If only all of this could melt. The cold’s worse than the Chinese, and it never stops coming. I take naps during the day whenever my superiors aren’t around. It seems like we’re all just waiting to die. They’ve surrounded us. We’re outnumbered. I don’t know if I’ll make it out of this, but I’ll sure as hell try.

It’s nearly dusk now, pepto pink Korean sky stretching out everywhere around us. There’s an eerie hush, the snow collecting all of the sounds and hiding them from us. I’m so hungry. Probably malnourished. But that’s okay. Just as long as I can operate my trigger finger.

I’m rested now. Ready. I don’t know how I know tonight will be it, but I just do. So I stand guard and watch as the sun disappears from the sky.

No recordings of babies crying, of women screaming. Nothing but less than silence, the lack of sound itself absorbed into the snow. I ready my M1 Garand. Exhale. Tap the letter in my breast pocket to make sure it’s still there.

And then their battle cries. And then their uniforms, tan against white, coming in from the shadows. Shots pocking snow all around me, sending drifts of it into the air. Crouching and taking aim. Firing. Watching a man fall to his knees, then his face. Features erased just as his life is. Drawing a bead on another. Dropping another. I will not go down today. Not today.

A man falls beside me, red already spilling onto white. I look at him, and within seconds his blood on the snow crusts over with ice. I go to him, and another shot tears off his jaw. He falls on his back, lifeless eyes stuck to pink sky that’s quickly fading to black.

I fire three shots. Create three dead bodies. The air is so cold I can almost taste blood. My legs shake so badly I think I might fall, but somehow I don’t. Somehow I take cover behind a vehicle just as bullets ricochet off of it. All around me there are men, good men, squirming and flailing in the snow. One among them pushes his boots against the ground to stand back up. I run to him. Pick him up, sling his arm over my shoulder. He calls to me: “Phil. Phil. Phil.” We make our way, the two of us, into the dark, to where I’ve heard there’s a medical truck.

We finally reach it. I stop to load the man in. He looks up at me: “Phil.” Goes limp in my arms.

I load him in. Turn to go. The corpsman tells me not so fast. I’m to get in too. I look down: a neat hole in my side, blood frozen, saving my life. I get in.